Climate change is a hot topic. In the aftermath of the US withdrawal from the Paris Agreement, cities and states have vowed to step up.    Perla Hernandez checks in on what climate change means to us here in Newfoundland and Labrador.

Earth’s average temperature has risen by 1º C since 1850 as a result of increased greenhouse gas emissions into the atmosphere. According to a NASA report, most of this warming has happened in the past 35 years with 2016 being the warmest year on record — due in part to El Niño, which changes weather patterns in the short term.

Meeting the Paris Agreement aspirational mark of 1.5 degrees matters to Newfoundland and Labrador.   Between the island and Labrador, the province has 29,000 k of coastline and is vulnerable to damages caused by coastal erosion, sea-level rise, and increased storms as well as adaptation challenges among communities.

Canada’s warming rate is twice the global rate.  According to Environment Canada, since 1948,  Canada’s North has been hit by an increase in temperatures of 3 degrees Celsius, while other regions like the East Coast have warmed by 1 degree Celsius. An increase of 2 degrees in global temperatures could mean for Canada a temperature increase of  3 to 4 degrees.

According to Turn Back the Tide, Newfoundland and Labrador has already warmed by 1.5°C  degrees, and some areas in the province could warm between 2.2°C and 4.0°C by mid-century.  A warmer climate will bring longer tourism and growing seasons for the province, but also stormier, wetter weather, coastal erosion and sea level rise.

Nationally-recognized climatologist, Dr. Joel Finnis from Memorial University’s Department of Geography completed a study on 50-year climate projections for the province.  Finnis explains:  “We do have a lot of sea front but one of the things that helps us even though we are on the water is our rocky rugged coastline. However, you are still going to see that erosion is going to pick up as sea level rises.  All the storms that pass by throw a lot of waves at the coast lines causing damage.  There are also indications that we might get more strong storms, and the more storms we experience, the more damage we’ll get. A rugged coastline partially protects us, but there will still be impacts and costs to the province.

This is consistent with the findings from a 2016 report by Natural Resources Canada pointing that as a climate change consequence, sea ice cover, increased storms and sea-level rise are likely to increase coastal erosion rate in Canada’s East Coast.

Storm events can cause flooding, wind damage and coastal erosion which ultimately have negative impacts in coastal communities, infrastructure, and ecosystems.  For instance,  tropical storm Igor in Newfoundland caused $51,000,000 in damages, isolated approximately 90 communities due to road closures, and put 22 communities in a state of emergency (see below). 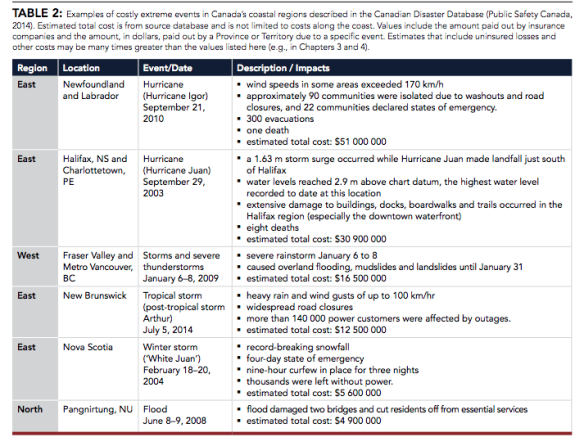 Finnis says, “Think about the winter storms that we had the last few years here, we had some big ones. If you have a strong sea ice presence, say for example on the coast of Labrador, and you have strong winds come along, that sea ice can help buffer and prevent the erosion. But if you have loose pack of ice, like we had at the harbour this spring, and you throw a big storm at it then the ice is going to start to move with the waves.  It is not necessarily going to dampen the waves so much but it is going to cause some damage to the boats, the infrastructure and the coastlines as well. It is not just water anymore, but loose and very heavy chunks of ice being battered against things”.

From an insurance perspective, it is estimated that by 2020, the annual economic damages to Canada’s coasts from sea-level rise and storm surges could reach between $2.6 – $5.4 billion increasing to an estimated $48.1 billion by 2080.

Climate change also poses the biggest challenges to the most vulnerable. According to a study by the Director of Labrador Institute of Memorial University, Ashlee Cunsolo, climate change is causing tremendous pain and distress in Inuit communities in northern Labrador.  Their relation to sea ice and cold is part of their cultural identity, and it’s under threat. According to the study, this changing environment is intensifying already complex mental health issues derived from intergenerational trauma of colonization, forced relocation and the impact of residential schools.

Climate displacement is becoming one of the world’s most powerful and destabilizing geopolitical forces. A recent study looks at how climate change played a role in the Syrian war that has destabilized European countries. Since 2015, Canada has welcomed 40,081 Syrian Refugees, but the UN still estimates that there are 13.5 million refugees requiring humanitarian assistance. Climate change will destabilize borders and increase humanitarian crises.  From droughts in the East Africa region, to unusually heavy rains pre-monsoon season in Bangladesh, the climate change impacts on people, economies and environments around the world will also have repercussions for Canada and for our province.  Finnis says, “We need to keep in mind that drought is going to increase food insecurity, and new insect pests could create all kinds of problems and health issues. And then you start thinking: What’s going to happen when people start getting displaced as a consequence of climate change?”

Although climate change is a global issue, the solution lies in sustained collaborative action at all levels: the international, national and local levels.

For instance, on average Canadians contribute to about 15 tonnes of carbon dioxide per year which is about three times the world average. In order to reduce emissions at home, Canada’s is taking action at the federal and the provincial level.  This May,  Environment Minister Catherine McKenna unveiled a technical document on the federal government’s carbon pricing plan which will be implemented across provinces by 2018.  The carbon tax will start at $10 per tone, rising $10 each year until reaching $50 in 2022. The carbon pricing is central to Prime Minister Justin Trudeau’s Pan-Canadian Framework for Clean Growth and Climate Change which includes measures to achieve emissions reductions across all sectors while driving innovation and growth in a low-carbon economy.

From a provincial front, the government of Newfoundland and Labrador is taking steps to cut emissions and promote renewable energy in the province. A net metering plan has just been approved by the Public Utilities Board, and as of July 1st of this year, net metering with Newfoundland and Labrador Hydro and Newfoundland Power is possible. This allows customers to offset energy costs by generating their own power using renewable energy like solar, wind and geothermal. This also allows customers to feed surplus power back into the distribution system so it can be used later or sell it to neighbours and other businesses in the area.

The effects of climate change will continue to grow and scale as temperature increases in Canada and in the rest of the world. The closer we stay within the 1.5 degrees Celsius goal, the less challenging it will be to adapt and to mitigate. In order to keep earth’s climate from moving into unchartered and more unpredictable scenarios, action is also needed from municipalities, businesses, people and others.

Something to be learned from the set of events that followed on from the US withdrawal on the Paris Agreement is that even with the US government withdrawing from the Paris Agreement, there is US climate commitment.  Climate response will continue globally and within the US as non-state actors step up and become climate leaders.  Shortly after the US announced its decision to withdraw, mayors from 30 cities, 3 governors, 80 universities, and more than 100 businesses in the United States stepped-up by reassuring their commitment to the Paris Agreement and they’re in negotiations with the UN to submit their contributions as part of the US.

In the same way, people, communities and institutions here in the province can all step up to take action.  Be it through putting up solar panels to generate your own electricity at home, or by composting, recycling and reducing waste in order to cut down methane emissions, we are all part of the solution.

Perla Hernandez is thegreenrock.ca’s project coordinator. She has a B.A. in political science and environmental studies from Memorial University. She attended the U.N. Climate change negotiations in Doha Qatar (COP18) as a Canadian youth delegate. Perla collaborated with the Climate Tracker and was a climate  columnist  for the Independent.  She is interested in the intersections between local and global climate change actions and solutions.

thegreenrock.ca is a not-for–profit company that informs and inspires people in Newfoundland and Labrador on ways to address the challenges facing our planet, our communities, and our lives.  like us and share!

Guide to the Good