Perla Hernandez, representative for the Young Liberals of Canada as part of the International Federation of Liberal Youth at the UN Climate Negotiations in Bonn Germany (COP23), November 2017.

Last November I attended the United Nations climate negotiations in Bonn Germany (COP23), where some of the topics were on the connection between local and global, and leveraging points for climate action.

Almost two years after the  Paris Agreement was signed, world leaders convened at the Bonn negotiations to work on the guidelines and tools to implement the Agreement. Over 19,000 participants, including government delegates, scientists, academics, business leaders and members of civil society were in attendance.

We are moving forward to tackle climate change, but not fast enough and not at the rate that it is needed on a global scale. Heavy carbon emission cuts are necessary to keep the temperature increase below 2° C,  let alone the 1.5°C target stipulated in the Paris Agreement as a safer line of defense for vulnerable populations (see previous article on why  the 1.5° C mark is important for NL).

The silver lining is that there is much we can do to help ramp-up climate action. Cities, municipalities, businesses and regions can help support national and global efforts to tackle climate change.

Local governments have a role to play

Climate change requires international cooperation, which can be challenging as nations have differing national interests and policy agendas. At COP23, there was an emphasis on the need to increase subnational levels – provincial (or state), regional, municipal, and local government involvement.

I attended a side event with Patricia Espinosa, Executive Secretariat to the UN Framework Convention on Climate Change (UNFCCC) where she said: “There is no single solution to climate change. All must take action: countries, cities and regions.” 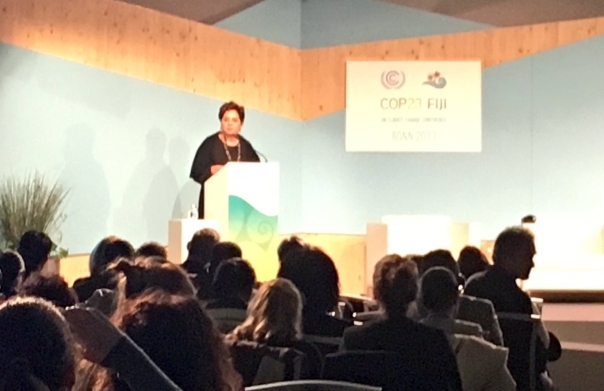 A bottom-up approach including communities, cities, regions and provinces can help complement national efforts while providing strategies that are appropriate to different geopolitical contexts, and inclusive to the needs of different populations.

Institutions, civil society and businesses can reinforce and ramp up climate commitments. For instance, in the aftermath of the US withdrawal from the Paris Agreement, subnational governments, institutions, civil society and businesses  reassured their commitment to the Paris Agreement and they’re planning to submit their greenhouse gas targets as part of the US targets.  Over 100 US mayors, governors, business leaders, university presidents, and civil society members formed a We Are Still In contingent, and attended COP23.

Businesses have a role to play in the transition to a decarbonized economy and can also benefit from embracing the green economy.  The COP23 Finance Day focused on the climate change impacts and opportunities from a finance perspective.

At the session: Mobilizing Investment to Support Nationally Determined Contributions Implementation and Increased Ambition, one of the underlying messages was that climate change and the decarbonization of the economy should not be seen as a problem, but as an opportunity.

Panelists agreed that carbon pricing is an effective tool for emissions reduction and talked about Corporate Social Responsibility, the need for technology transfer to developing countries, as well as the need to increase investment in low carbon technologies and infrastructure.  They also talked about the growing projections of renewable energy and green infrastructure as the business opportunity of the 21st Century compared to the diminishing projections of fossils – calling out for divestment. 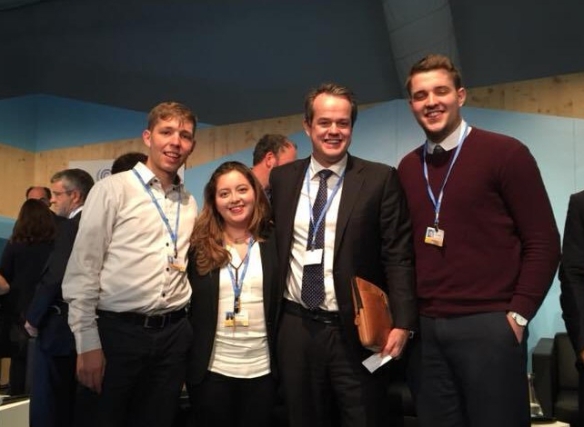 In order to achieve the significant cut in greenhouse gas emissions we need to think differently as a society and we need to be fair and equitable to everyone. 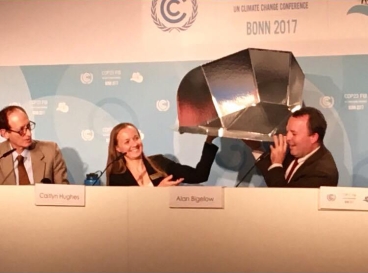 Equity and climate change are inexorably linked. The work to reduce GHG emissions must address economic and social inequities.  Technology can bring solutions that bridge climate and social challenges. At COP23 I attended a press conference by Solar Cookers International a US nonprofit that advocates and provides education on solar cooking. Solar box cookers can provide hot food, safe drinkable water (boiled water) with minimal impact on the environment.  I was impressed by all the  projects  that Solar Cookers have  started worldwide in refugee camps in Kenya, Ethiopia, Congo, Burundi, Eritrea, Rwanda, Uganda and more.

Connecting the dots and getting everyone on board

As part of the International Federation of Liberal Youth delegation, I had the opportunity to meet with  Canada’s Ambassador to Germany, and Special Envoy to the EU. Ambassador Stéphane Dion has held several positions – among them Minister of Environment overseeing Kyoto Protocol’s implementation and previous President of COP11 in Montreal. 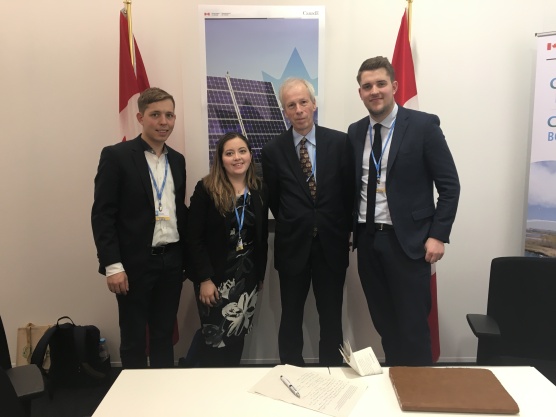 Ambassador  Dion provided some insights regarding the need for a paradigm shift in governance to a collaborative holistic model that integrates sustainability across sectors throughout the government structure and percolating to society. “Sustainability should be integrated in every department: finance, global affairs, department of health and so forth” said Mr. Dion.

Ambassador Dion stressed the importance of getting society on board with this sustainability paradigm – both the converted and the non-converted – and to transfer knowledge on climate change’s challenges and opportunities so that this model stops being an abstraction for many and becomes a reality.

A lot of work remains. We need to make sure that our local efforts match the global level of action that is needed to tackle climate change – emissions reduction, finance, innovation and technology. We need to work together, bring everyone on board, and look at complex problems from all angles – business as usual won’t cut it.

Guide to the Good